Please review and correct the information below.

About the Live Well York Artwork

Local people were consulted about the development of this website and they very much wanted a local artist to produce the banner.

York Museums and Gallery Trust supported the process by commissioning this piece of work and Stephen Hodgkins was selected.

"Typically when towns and cities create visual skyline banners they include the places most popular with tourists.  While this can be good for getting people to visit it does not always include those places that hold important meaning to the often diverse and disparate local communities. Banners, web headers and posters of York are no different, presenting the usual suspects of the York Minister, Cliffords Tower, the city walls and its various gates and bars.

However, for the York’s local communities there are other places of much more personal and collective meaning. These are many and include a range of hidden place based gems, as is featured in this piece. People of York’s were asked;

From this several places were suggested and linocuts made of each.

1. St Luke's Church on Burton Stone Lane, nominated for the community café and various groups they put on, with also a reference to York FC floodlights as many people spoke to me about sports and fitness clubs as important ‘communities’.

2. Priory Street Centre, as a hub of voluntary sector activity, and including the hosting of many diverse organisations.

3. The Reading Café at Rowntree Park, this image was sent to me, and is used to acknlowedge both Explore libraries and also the many parks of York.

4. The Central Methodist Church on St Saviourgate, not with specific reference to the church, but rather organisations such as Kyra Womens Project and Carecent, a breakfast centre for all homeless, unemployed or otherwise socially excluded members of our community.

6. York Mosque at Bull Lane to reflect the range of faiths celebrated in York

Using the linocuts two pop art style ‘group prints’ were facilitated. One at St Luke's Church with people attending the Friday activities, and a second at Priory Street, at a People Helping People event. 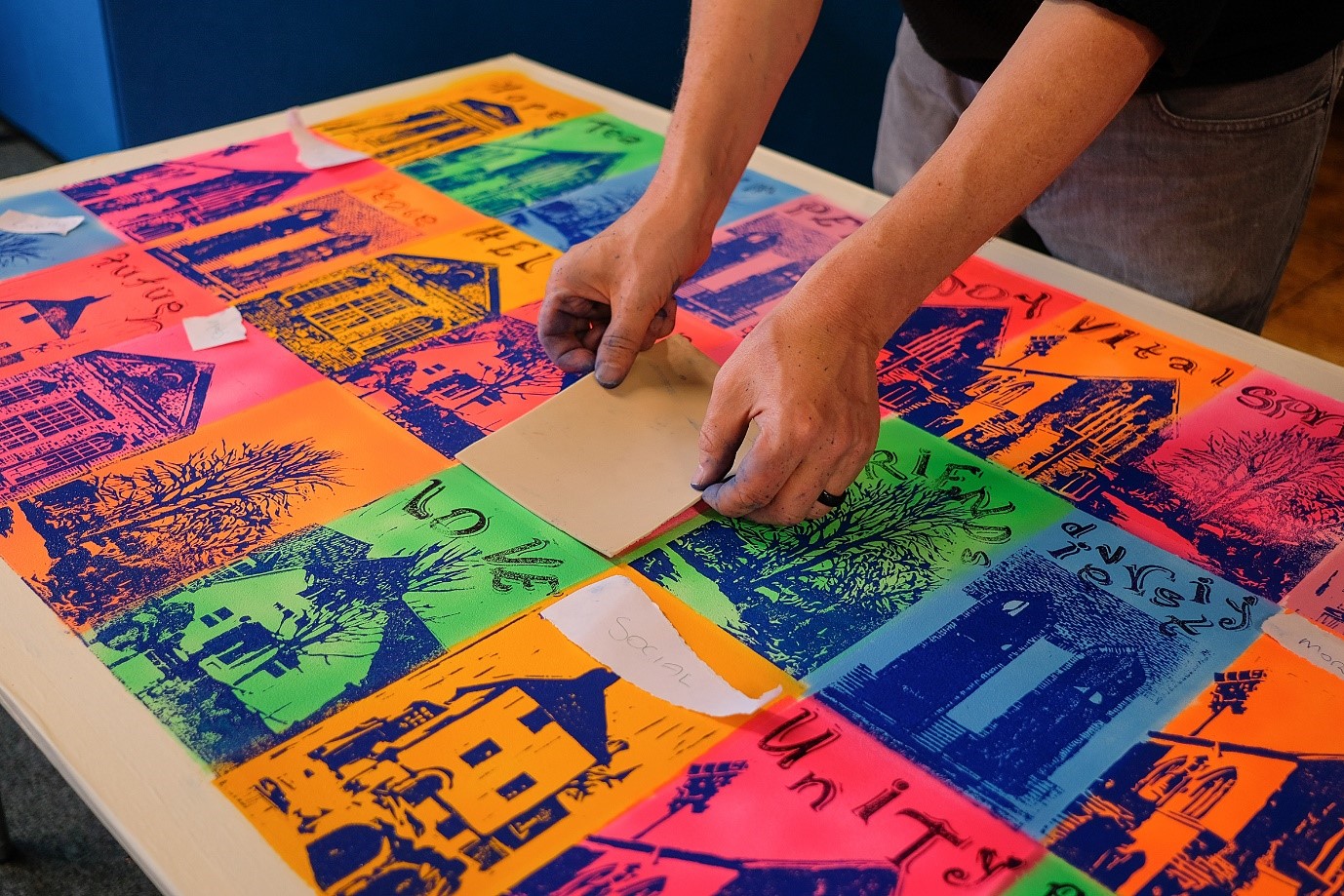 During the ‘group prints’ people were encouraged to add key words about what community meant to them using a letter print stamp set made from handwriting samples collected visitors of York Explore Library. This font highlights the unique shapes people express when making marks, and the wonderfully distinct style of when they come together.

Be Part Find Shelter Join In Love Play is a collective piece that reflects on the subjective meanings of ‘community’. This can relate to identity, but also to interest. It can be about where you are, but also where you want to go. And we are not just part of one, but rather we connect and move between many communities through our shared ideas, experiences and preferences.

A further electronic image was then captured as a single line to create a banner for the Live Well York website. This had muted colours and fonts removed to ensure the website met accessible standards."